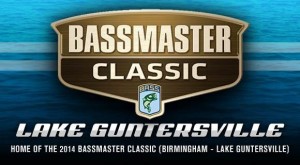 When B.A.S.S. announced that the annual Bassmaster Classic would return to Alabama’s Lake Guntersville in 2014, anglers across the country began to salivate. To many, Lake Guntersville is considered the best bass fishing lake in the entire country.

Located between Bridgeport and Guntersville, the 69,000-acre Tennessee Valley Authority impoundment has been a bass fishing Mecca of sorts, particularly during the last six years. In 2012, the average size bass caught out of Guntersville was 2.24 pounds, the largest average in 27 years of the Alabama Bass Anglers Information Team. The bass are healthy and thriving, as is the lake.

On February 21, the world’s best bass anglers congregated at Alabama’s bass cathedral for their sport’s equivalent of the Super Bowl. With 2013 winner Cliff Pace, sidelined with a broken leg as a result of a tree-stand accident, the 2014 title was up for grabs.

Nine Alabamians graced the field of 55 anglers at Guntersville, all of whom were considered legitimate contenders for the greatest victory in competitive bass fishing. However, only one Alabama native came out on top.

In the end, Springville, AL native Randy Howell hoisted the trophy after hauling in 29 pounds, 2 ounces on his third day. Howell, who found himself in 11th place after the first two days, was able to hold off first time Bassmaster Classic contender from Connecticut, Paul Mueller. Howell finished with a three-day weight total of 67 pounds, 8 ounces, exactly a pound more than Mueller. After achieving a feat he claims he has only dreamed about, Howell took home the title of 2014 World Champion and $300,000.

Jordan Lee, a Vinemont, AL native and member of the Auburn University Bass Club, surprised nearly everyone, finishing in sixth place in only his third B.A.S.S. appearance. He was the first college series angler to ever make the top 25 in the Bassmaster Classic. Lee had a final weight of 62.1 pounds.

Jasper, AL resident David Kilgore finished 8th, with a final weight of 60.7 pounds in his first Classic appearance. Kilgore has won three B.A.S.S. tournaments, all in Alabama. His most recent came at the 2013 Bass Pro Shops Southern Open on Logan Martin Lake, which qualified him for the 2014 Classic.

Aaron Martens, a Leeds, AL resident, finished in 13th place, with a three-day total of 55.1 pounds. Martens was considered by many to be an early favorite to win. In 2009, he won the B.A.S.S. Elite Series Southern Challenge on Lake Guntersville, hauling in a whopping total of 107.8 pounds. He’s won two Angler of the Year titles in 2005 and 2013.

Finishing in 24th was Coby Carden, a Shelby, AL native. Carden caught a total of 46.9 pounds over three days in his first Bassmaster Classic.

Chris Lane, a Guntersville native and early favorite, had an incredibly disappointing weekend. The 2012 Bassmaster Classic Champion finished in 36th place, with 27.6 pounds. Lane’s brother Bobby Lane, of Florida, finished 12th. It was the fourth Bassmaster Classic they have fished together.

Wetumpka, Alabama native Greg Vinson, who took second place in the 2012 Classic, finished 38th, with 26.9 pounds. Like many of his Alabama peers, his lone career victory was won in Alabama, at Lake Martin in Alexander City.

Gerald Swindle, a Warrior, AL native and fan favorite, finished in a disappointing, if not embarrassing 53rd place. Swindle, who has made almost $1.5 million in career earnings and 2004 Angler of the Year, caught only eight pounds worth of fish over three days.

Though all nine anglers did not fare as well as Howell, they certainly represented the State of Alabama well in terms of number. Guntersville businesses also saw increased traffic, as angling fans from across the US flocked to northeast Alabama. Overall, Alabama came out on top after this year’s Bassmaster Classic