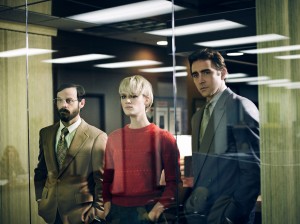 Most of us now have a “default” form of communicating — the “smartphone.” It’s also in every movie, show, and web series that needs a cell phone. The smartphone is a way of life for us today — and in TV shows. Likewise, laptops are everywhere as well. So what happens when a show comes along that pre-dates the iPhone, or even the first laptop, and the race to come up with the latest technology had just begun, and the competition turns dangerous?
“Halt and Catch Fire” is about three partners at the height of the technological age-right after IBM has the technology world in their pocket with the release of the IBM PC. Former IBM executive Joe MacMillan (Lee Pace) forces his new company into the personal computer race, along with engineer Gordon Clark (Scoot McNairy) and technological prodigy Cameron Howe (Mackenzie Davis). Each of MacMillan’s partners has something to lose-Clark’s marriage is on the rocks after a failed attempt and a new invention, and Howe’s career could end before it begins, destroying her chance at a future. Yet they ask themselves, is it worth it?
Though in only the seventh episode of it’s first season, the show has already caught the attention of entertainment websites and has brought AMC back from the dead after their glory days of “Breaking Bad” and “Mad Men”. The Hollywood Reporter calls it, “…a triumphant pilot with excellent writing, impressive acting and a noteworthy cinematic visual style.” While Rolling Stone hasn’t caught on to the 80’s era frenzy quite yet, the website promises that “…the likelihood that Halt will show us something we haven’t seen before is growing.”
Another special aspect of the show is Lee Pace’s return to television since “Pushing Daisies” was cancelled in 2009. Pace has filled his time with the big named “Lord of the Rings” series, making his debut as Thranduil, Legolas’ father in The Hobbit. His biggest name television performance was introverted pie maker Ned on “Pushing Daisies”, but he has big projects on the way. He scored roles in movies such as Guardians of the Galaxy (Ronan the Accuser), a currently untitled Lance Armstrong biopic, and The Hobbit: The Battle of the Five Armies (Thranduil). Scoot McNairy isn’t exactly a big name, but he will be with the newest DC Universe movie coming out in 2016, “Batman v Superman: Dawn of Justice”. He was also featured in the popular drama “12 Years a Slave”, and in “Argo”. Mackenzie Davis doesn’t have that many credits under her belt, but one would not be able to tell from her performance in “Half and Catch Fire”. Her most recent movie is That Awkward Moment.
The interesting plot and even more interesting characters show “Halt and Catch Fire” to be a promising television show with characters one could easily fall in love with-or hate. The show is on episode 8 and airs on Sundays at 10/9 central on AMC. Warning for mild language and sexual content.