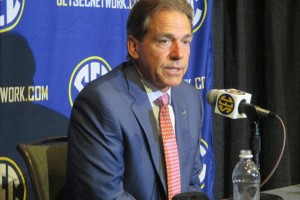 ON REPORTS HE ALMOST LEFT
FOR A $100 MILLION DOLLAR
CONTRACT AT TEXAS
“I didn’t have any conversations with Texas, and nobody offered me anything. This is the station in my life… where I want to establish one great program. I’m very happy at Alabama. Miss Terry is very happy here. We enjoy the challenges here, and this is where we plan to end our career.”

ON THE 2014 ALABAMA SQUAD
“Our situation as a team is a bit different than when we were coming off two championship seasons. Having come off two losses to end the season, you need to check your ego at the door. That’s everybody in our organization who needs to trust in our ability to be successful, and have the willingness as a family and a group to help each other so we have the opportunity to improve. It’s about buying in.
“…We’re basically an unproven team. We have a lot of question marks, like quarterback. We have a transfer player (Jacob Coker), and we have a player in Blake Sims who’s a little bit different kind of quarterback.
“…I think every quarterback has to go through a process. There are three critical factors. Decision making and judgment are critical. Accuracy with the ball is critical. And leadership is a critical factor.
“…Jake Coker has the opportunity to come in and compete. Blake Sims has already been competing. The development of that position is going to be critical to the success of our team.”

ON LANE KIFFIN
“The players have responded to him very well. New energy, new enthusiasm, new ideas to do some things offensively that would enhance our chances of being successful. I’m really excited to have the opportunity to work with him.
“…I think all of us would be remiss, I was a head coach once and went back and worked as an assistant, and that’s a difficult transition for anybody. I think Lane has certainly handled that very, very well.”

ON THE VALUE OF AN
EXPERIENCED STAFF
“The more experience that your staff has, obviously I think the better they understand the big picture and have the kind of foresight that you need to have that you know when you make changes, what the cause and effect of those changes are going to be.”

ON HOW MANY CONFERENCE GAMES SEC TEAMS SHOULD PLAY
“I know that everybody thinks I’m crazy, but I think that, you know, every player that comes to an SEC school should play every team in the SEC, which means you have to play two or three teams on the other side. People should make those decisions beyond us. They should do it based on what is in the best interest of our league and college football in general.”

ON DISCIPLINE VS PUNISHMENT
“Discipline is not punishment. Punishment is only effective when it can help change somebody’s behavior.
“Now, when somebody proves they can’t be part of an organization, then sometimes you got to get the wrong people off the bus… but I just want you all to know that we all have to be committed to trying to help our young people from a culture standpoint have a better chance to be successful in their life. That’s something that we’re very much committed to and really is the reason that we coach ’cause that’s the part that I like the best. It gives me the most positive self-gratification to see somebody have a chance to be successful.”

ON PLAYERS HE HAS DISMISSED
“I want you to know that there’s not one player, not one player, since I’ve been a head coach that I kicked off the team that ever went anywhere and amounted to anything and accomplished anything, playing or academically. All right? That’s not always the answer. Discipline is not punishment. Punishment is only effective when it can help change somebody’s behavior.”

ON HOW HE HAS CHANGED
AS A COACH
“As a coach we learn things all the time, from other people, from being a good listener, adapting to technology, I don’t think the core values of what is important to be successful have changed at all.”

ON BEING A NEW GRANDFATHER
“I’ve only made a few mistakes in terms of being a grandfather to this point. That’s after so many times of as soon as the baby makes a peep, seeing somebody run to pick her up, you say, She’ll be fine, just let her cry. That was a mistake now. That was a huge mistake.”