“KINGFISH” TAKES A LOOK BACK ON HIS MUSIC AND LIFE

Christone “Kingfish” Ingram opened a lot of eyes with his 2019 debut album, “Kingfish.” Here was someone coming on the scene at the age of 19 who, first of all, showed surprisingly advanced skill as a guitarist, and more importantly had the solid songs to back up the playing.

Ingram’s songs also showed that he was well acquainted with the foundational artists of the blues and the sound artists like Muddy Waters, B.B. King and Buddy Guy created during the post-World War II era – a style that paved the way for the rock music of the Rolling Stones, the Animals, Allman Brothers and a host of acts that have come along since the 1960s. Where many younger blues acts seem to draw from more recent blues-based artists like Stevie Ray Vaughan or Kenny Wayne Shepherd, Ingram, who actually was born in Clarksdale Mississippi, which is considered by many to be the birthplace of the blues, sounded like a genuine Delta blues artist. 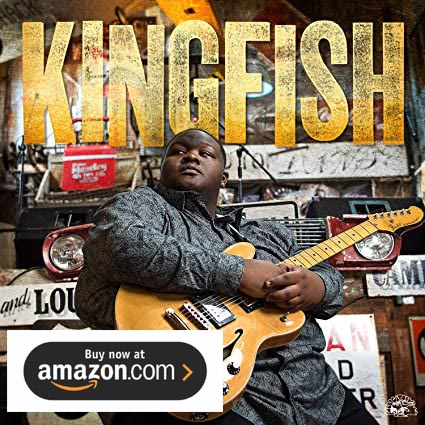 The accolades for “Kingfish” came flooding in and the album earned a Grammy nomination, while many writers touted Ingram as the next big thing in blues and an artist who would be handed the torch by the likes of Guy (an early supporter of Ingram) and would carry blues forward to the next generations. Ingram seems to be taking the acclaim in stride.

“I tend to believe that my answer to that always changes whenever someone asks me that,” said Ingram, who just turned 23 in January, said in a phone interview. “Like you want to say that ‘Ah man, it doesn’t faze me. It’s not no pressure.’ But once you really think about it, I’m able to say it is pressure a little bit, but I’ve tried hard not to focus on it. You know, once you tend to get wrapped up into all of that and all the hype and everything, it tends to rattle the brain and honestly, I’ve kind of had my share of those. I tend to not think about it so much. But at the same time, of course, I appreciate all the talk about the next big thing and everything like that. It does a lot for the self esteem, but I try not to get too wrapped up in it, for sure.”

The initial hype that surrounded “Kingfish” will probably die down, but with his 2021 follow-up album “662,” the guitarist-singer walks all over any worries about a sophomore slump, showing considerable growth as a songwriter and vocalist, delivering an album that’s notably richer both musically and lyrically.

The career that is unfolding now for Ingram is pretty much what he wanted to pursue since he was a pre-teen kid.

“Well, it started off with my dad. I want to say my dad was the one who would buy me all of the instruments. I think he saw something (in me) early on himself, even though he’s not musically inclined, or anyone on his side of the family is,” Ingram said. “And people would tell him why are you buying him all of those guitars and keyboards? He should be playing football.

On my mom’s side of the family, that side, they were the reasons why I wanted to play because I would go to church and see them in the quartet (gospel) groups. All of my uncles on their side of the family preached, or preached and played or just sang and played. So I was around them 24-7, and my mom, she was a singer as well.

So I would see her sing a lot in churches as a child. So all of that pretty much influenced me to want to become a musician and learn from my Clarksdale history and learn what the city was about. That’s where the blues came in and I started to learn more about the blues around age eight. That’s pretty much everything kind of connected as far as me wanting to play.”

Ingram started out on drums, then toyed briefly with guitar before learning bass. He played his first gig at age 11 and by his early teens, he was playing bass in local bands.

“I started on guitar but I felt like my fingers were too big for the neck. So yeah, right after that I moved to bass and bass became my primary instrument,” Ingram said. “That’s the instrument I would play in the local bands and whatnot.”

As a teen-ager, he also took classes at the Delta Blues Museum in Clarksdale, which furthered not only his playing skills once he returned to guitar, but his education into the history of blues and Clarksdale’s place in the genre. With his music firmly rooted in the blues, Ingram also explored other more contemporary artists and genres, which helps explain the wider reach of the songs on “662.” The rock edge was present on “Kingfish,” but it re-emerges even more strongly on the second album, while there are also moments that touch on jazz, funk and soul. Still, his music first and foremost is blues.

“Me knowing it (blues) as the foundation, I think for one, that’s what set me up big time to go out and discover new things all while not disrespecting the (blues) genre,” Ingram said. “They (Delta Blues Museum teachers and Mississippi bluesmen Daddy Rich and Bill “Howl-N-Madd” Perry) taught us about Son House and Robert Johnson and the list goes on and on. And then me being younger, of course, I was going to go and find other stuff like the rock music and Prince. I think with me knowing all of that (blues) was the foundation, it definitely set me up for this as well.”

Ingram was still touring the “Kingfish” album, gaining momentum along the way, when the pandemic put a stop playing shows in early 2020. During his time away from touring, Ingram faced some personal challenges, including the death of his beloved mother and a cancer scare for his father. But he was productive while he waited out the pandemic back home in Clarksdale.

The songwriting included writing the songs for “662,” which is named after the area code for the Clarksdale area. As with the “Kingfish” album, he hooked up with producer/songwriter Tom Hambridge, and the two held weekly songwriting sessions via Zoom from May to September before heading into the studio, where the album was pretty much completed in five days.

Ingram is back on tour, playing in a four-piece format with bass, drums and keyboards, and he plans to perform plenty of songs from his two albums.

“We’re just trying to mix in both of the albums because there are some people who still listen to the first one and they really enjoy that one,” he said. “But with this tour, I’m happy I’m at a point now where I can play a whole show and do all of my own stuff. So that’s where we’re at now, putting both records together for one set.”