The beginning and ending stunts in “Venom” director Reuben Fleischer’s “Uncharted” (**1/2 OUT OF ****) qualify as the best scenes in this otherwise uninspired adaptation of Sony’s ultra-successful PlayStation videogame. Imagine “Pirates of the Caribbean” (2003) mashed up with “National Treasure” (2004), and you’ve got the nitty-gritty about this predictable thriller. The scenes between those two astonishing stunts amount to little more than expository fodder. 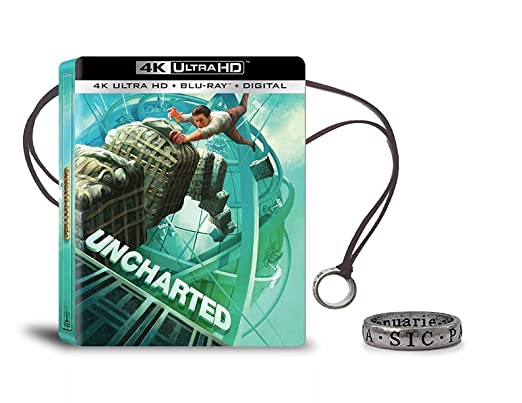 They also trot out the wicked villains, wealthy Santiago Moncada (Antonio Banderas of “The Expendables 3”) and his lieutenant, Braddock (newcomer Tati Gabrielle”), a knife-wielding bad girl with no qualms about killing. Moncada plans to beat our heroes in a headlong race to find Ferdinand Magellan’s fabulous treasure.

Along the way, Victor informs Nathan that he used to fly helicopters in the U.S. Navy. This turns out to be relevant because Victor will find himself poised at the controls of a Sikorsky S-64 Skycrane. These skeletal helicopters resemble giant grasshoppers, and you’ll be surprised at the payload they can haul.

Meantime, this preposterous pablum plunges our heroes into some challenging aerial predicaments. If you’ve caught the trailer, you’ve seen the awesome opening gambit. Nathan clambers frantically up a succession of equipment pallets strung out like a huge rope ladder from the cargo jet’s rear hatchway.

The pallets have been shoved out, but they haven’t been released. The plane’s violent slipstream jostles both Nathan and his enemies as they wrestle with each other on these undulating pallets.

Fleischer doesn’t show the outcome of this hair-raising cliffhanger until well over an hour into this breathless, 116-minute, PG-13 rated actioneer. Inevitably, the suspense in these stunt scenes suffers because it is conspicuously clear Holland and Wahlberg performed their stunts in the cozy safety of a greenscreen studio.

Indeed, the “Uncharted” prologue steps up the action that the James Bond extravaganza “The Living Daylights” (1987) forged with a similar stunt. Bond had tangled with a fearsome foe while each clung desperately to a baggage net flailing from the cargo aircraft’s rear hatch doors.

During an early orphanage flashback, a juvenile Nathan and his older brother Sam are caught before they can steal the only known copy of Magellan’s historic map. Rather than face punishment worse than expulsion from the orphanage, Sam runs away, leaving his little brother behind to fend for himself.

Meanwhile, Sam has scoured the earth for Magellan’s legendary loot and sent Nathan postcards about his progress. While Nathan grows up to become a light-fingered pickpocket who tends bar and mixes drinks as nimbly as Tom Cruise did in “Cocktail” (1988), brother Sam cavorts about the globe with his new partner Victor.

Eventually, Sam vanishes without a trace, and Victor recruits Nathan when the latter is old enough to replace Sam. Naturally, Nathan doesn’t trust Victor any more than Victor trusts Nathan. Nevertheless, thieves must do what thieves must do.

Despite the seemingly impossible obstacles that confront them, Victor and Nathan stick together through thick and thin. Eventually, these two run afoul of millionaire villain Santiago Moncada who boasts the financial wherewithal to bankroll an expedition to recover the treasure. Moncada and his murderous minions are prepared to cut each other’s throats before they slash our heroes’ gullets.

Feminists may cry foul at Fleisher for the treachery of the two dastardly dames here who want to score more than their male accomplices.

During the middle part of this mayhem, actress Tati Gabrielle steals the show with her utter duplicity and her striking coiffure. You’ll neither forget Gabrielle nor her dubious demise in the final quarter hour after the last big stunt. Meantime, “Uncharted” charts the box office ascension of teen heartthrob Tom Holland, riding on the heels of last year’s web-slinging Marvel masterpiece “Spider-man: No Way Home.”

If “Uncharted” conjures up anything surprising, it is Mark Wahlberg playing second banana to Holland’s golden boy hero. Previously, Wahlberg had been numero uno in all of his films. Apparently, age has overtaken him finally as it does so many superstars when they are paired up with rising young stars nipping at their heroic heels.

Altogether, nothing about this epic appears remotely realistic. Mind you, the people who produced “Uncharted” with its utterly contrived plot weren’t worried about stretching credibility, and neither should their audiences.

Lastly, don’t rush from the theater when the film fades to black or you’ll miss an after credits end scene that foreshadows a potential sequel.

Check Out More Movies Reviews By Clicking this link! https://theplanetweekly.com/category/entertainment/