Home
Music
Almost three years after his sold-out show at the Alabama Theatre,  Grammy-nominated artist Leon Bridges made his triumphant return to the Magic City, bringing his ” Good Thing” tour to the BJCC Concert Hall, April 23. The Alabama stop, which was in support of his sophomore album, gave fans a night of soul and dance. Brittish pop star Jess Glynne served as his opener.
The shift from a large historic venue like Alabama, known for their amazing acoustics, to the 2,800 seat concert hall seemed odd for Bridges’ return to the Magic City. However, that didn’t stop the 29-year-old from filling the room with a roller coaster of melodies.
Best known for her Clean Bandit collab ” Rather Be,” Glynne serenaded the crowd with a mixture of her soul and pop. Opening the show with a stripped down version of the usually up-tempo “Hold My Hand”, the UK songstress took a more Gospel approach to her, often bringing her background vocalist for tracks “No One”, ” Rollin” and ” These Days.”
Taking the stage shortly after, Bridges graced the stage with ” If It Feels Good” before shifting gears to ” Bad Bad News” and the dance-heavy ” Missippi Kiss.” Armed with jazz band plenty of stage space, the headliner danced through 18-song setlist before closing out with an encore performance of ” River.”
Check out photos from the show below: 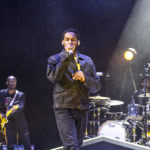 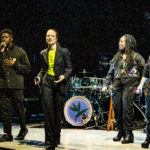 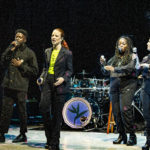