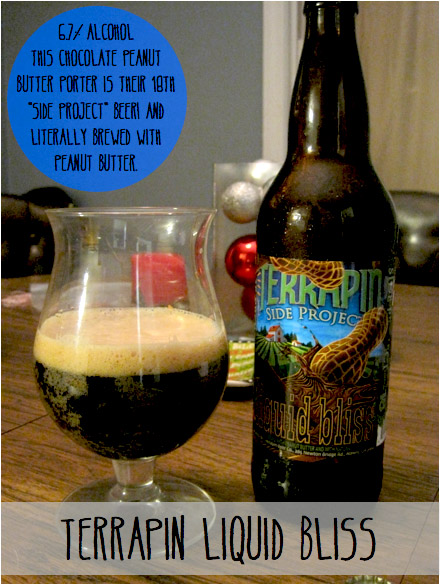 As some of you may know, a brewery in Birmingham called Beer Engineers really reached their fame with one beer. All of their other beers were subpar, but the Peanut Butter Porter was really what people cared about; at least I can say that for myself. That was until Terrapin started regularly producing their Liquid Bliss Chocolate Peanut Butter Porter, a game changer of sorts. I knew that I liked a lot of other Terrapin beers, and I was a fan of the Peanut Butter Porter made by a less than consistent brewery, so I decided to purchase the whole six pack and try it out.
Terrapin is another one of those breweries that has labels I love to look at. The Mosaic Red Rye IPA has a beautiful mosaic representation of a hop nugget, and this one is no different. The whole beer has a yin and yang characteristic and compares chocolate and peanut butter to the yin and yang. The beer pours a pitch black hue with a deep brown head that wasn’t too fluffy, but not nonexistent either; a good finger width that fizzled out quickly. When you take your first sniff, you really, and I mean really, pick up the peanut butter. You also get some really subtle notes of dark chocolate on the back end and along with what I think is some coffee. The smell really reminds me of those dark chocolate Reese’s Cups that were around for a little while, and I love that.
Creating harmony through flavors like chocolate and peanut butter is something a lot of people attempt to do, but very few people do it well. This was a time when it was done extremely well. When you take the first sip, you’re punched in the mouth with a dominant taste of peanut butter. You even get that weird oily feel on the back of your tongue as you would when you take a big bite of peanut butter. I’m all about bringing the experience with flavors and that aspect drove home peanut butter for me. Toward the end, the beer really starts to develop a mix of flavors that really round it out. There were some slight notes of coffee, but more notably, there was a lot of cocoa. It really helped tie in the peanut butter cup flavor for me, but I did have a few issues with the taste. The creaminess aspect could have been a little milkier for me and I wouldn’t have minded. I prefer milk chocolate in accompaniment to peanut butter, but the dark chocolate flavor added something that I was expecting; it was still tasty nonetheless. The coffee undertones I got were a little unwarranted for me. I understand sometimes it’s commonplace for those coffee flavors to be there, but something about this one just didn’t rock my boat like it usually does. If those weren’t there at all, I wouldn’t be mad.
The mouthfeel was excellent and ranked higher than most porters I’ve had lately. The carbonation level was perfect and really lent itself to adding to the velvety quality of peanut butter. After each sip, I would have a strong aftertaste of Reese’s; which is never not a good thing and it always made me want more. The beer rested well on the tongue so you could allow time for the flavors to fully develop. This is definitely an after dinner beer, because it is really heavy. I couldn’t imagine drinking more than one of these at time for fear of falling asleep or being too sick to think straight and at 6.7%, the beer really has no alcohol taste at all.
All in all, I have easily replaced Beer Engineers entirely, because Terrapin does what they set out to do much better; and at a lesser price (around $8.99 at Hop City in Birmingham.) The overall quality of the beer is on a much higher level and the flavors are more in your face, which is what I look for when drinking something so strange, like a peanut butter flavored beer. I would definitely enjoy this beer again and maybe not even just in the typical way. I want to pour this bad boy over some vanilla ice cream and then die, because nothing will ever taste that good again; or so I imagine. So if you’re on the fence about this one, branch out and try something that may not sound good to you, because being adventurous can be rewarding; at least it was for me.