MOVIE REVIEW OF “THE CONTRACTOR”

Chris Pine reunites with Ben Foster in their third outing together in Swedish director Tarik Saleh’s “The Contractor” (**** OUT OF ****), a sizzling but bittersweet military thriller about mercenaries on a covert black ops mission in Berlin, Germany, where everything goes askew. 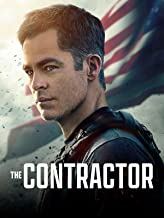 In “The Contractor,” they are cast as former battlefield buddies done with active duty. They hire themselves out to an independent private contractor,

Rusty Jennings (Kieffer Sutherland of “Young Guns”), who sends them “in the interests of National Security” to liquidate a Syrian-born, Harvard-educated virologist, Salim Mohsin (Fares Fares), whose bioterrorism research has been linked to the terrorist outfit Al Qaeda.

Unlike “The Wild Geese” (1978) and “The Expendables” (2010), “The Contractor” relies on subtlety rather than sensationalism. Saleh and “Fighting Tommy Riley” scenarist J.P. Davis have created a flawed but sympathetic hero in Special Forces Sgt. James Harper (Chris Pine of “Star Trek”), whose backstory runs deeper than usual.

Son of an Army sergeant, James shredded his knee in combat. Although he has completed rehab, his new CO discharges him because James resorted to taboo drugs to alleviate his pain.

Although he received an honorable discharge, James loses his pension and all medical benefits. Meantime, James is wallowing in a sea of debt. He has a home mortgage, a wife Brianne (Gillian Jacobs of “Bad Milo”), and an adolescent son Jack (newcomer Sander Thomas).

Repeatedly, Brianne doesn’t want him to hire himself out as a mercenary. Sadly, James is a beggar who cannot be a chooser. He consults with his former superior officer, Mike (Ben Foster of “3:10 To Yuma”), and Mike vouches for him to Jennings who has no problem adding James to the team.

Our heroes slip into Mohsin’s lab, seize the scientist’s research, and destroy the place. No sooner have they exfiltrated than the Berlin Police arrive with howling sirens and blue flashing lights. The police shoot and kill two of the team. Later, Mike catches a bullet.

Fearlessly, heaving his wounded buddy across his shoulders, James hauls Mike through the woods in the dark while the police blunder in pursuit. Wading into a lake, Mike and James take refuge in an underground drainage pipe.

They hole up until the coast is clear. James performs a blood transfusion on Mike and saves his life. Nevertheless, the hustling has taken a toll on James’ knee, and he stays behind a day while Mike sets off to deliver the goods.

They have arranged a rendezvous at a motel. James emerges from the lake 24 hours later. At the motel, James finds no trace of Mike. He contacts Rusty about his own extraction. Surprisingly, the guys sent to extract him have orders to kill! Miraculously, James escapes these former soldiers and suspects skullduggery on Rusty’s part.

When it isn’t depicting gung-ho heroics, “The Contractor” considers the plight of vets like our hero who have given everything to the military, only to be cashiered for dubious reasons.

The bullet-riddled action around the lab, in the daylight streets of Berlin, and later in remote Georgia woods is lensed with documentary style realism. The crackle of gunfire sounds like bacon popping in a red-hot skillet. Neither director Tarik Saleh nor Davis wallow in gratuitous violence and bloodshed.

You won’t see any fireball explosions or marvel at any elaborately orchestrated stunts with planes, trains, and automobiles. Everything about the firefights has a business-like ambience.

Indeed, the filmmakers refuse to glamorize the violence. Instead, they stage it so it looks as grim as possible. One character warns James that black ops agencies use the phrase “in the interests of national security” as a cover for their shady operations.

Interestingly, a crisis of conscience assails the moral-minded James when he must execute an innocent scientist who flaunts his atheist beliefs at the point of death! Now, our protagonist survivalist instincts fuel his desire to get home and safeguard his family.

Chris Pine is believable as a man wronged and forced to tread through the fires of Hades. Ben Foster is just as convincing as his cohort. Kiefer Sutherland is the devil who makes them pay! A straightforward, no-nonsense nail-biter from fade-in to fadeout, “The Contractor” depicts the amoral side of being a mercenary.