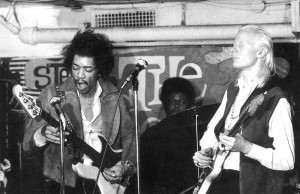 July 16th brought America closer to the end of an era. As the years go on, the country loses more and more artists who forged one of the most influential genres of American popular music: blues. Born in the Deep South out of African-American folk music, blues crossed over to white mainstream society around the 1950’s and 1960’s, and became the basis for rock n’ roll, which would become the most revolutionary form of popular music in the history of recording. While many artists continue to be influenced by delta and Chicago blues, very few true blues artists remain. This past month, the world lost another when Johnny Winter passed away in St. Gallen, Switzerland. He was 70 years old.
Winter didn’t exactly fit the stereotype of an old blues artists. Not only was he white, he suffered from albinism. And his home of Beaumont, Texas was not like epicenters of New Orleans, Memphis and Chicago. His family included brother Edgar Winter, known for hard rock radio hits “Frankenstein” and “Free Ride” in the 1970’s. But Winter was raised to be a musician, and when he began listening to blues in his teen years he took to learning the art as if it were a more traditional discipline. He was a student of Muddy Waters, B. B. King and other masters from the late 50’s and soon began sitting in with local blues outfits.
After some minor recording success with several outfits in the late 60’s, Winter signed to Columbia Records after label representatives saw him perform at the famous Fillmore East in New York City. In 1969, he released his first album for Columbia and performed at the now legendary Woodstock festival. He also had a brief affair with singer Janis Joplin during this time, leading to a performance at Madison Square Garden featuring the two. Later in the 19070’s, he released albums with his band The McCoys (later billed as “Johnny Winter And”), which included future star guitarist Rick Derringer. Unfortunately, he also developed a severe heroin addiction during this time. He recovered, but spent many years in frail health leading to his death.
Aside from his own recordings, Johnny Winter is important to the blues movement for helping modern critics and fans rediscover the masters of the past. In the late 1970’s, Winter began recording with blues legend Muddy Waters, one of his idols. The recordings gave Waters his greatest financial success, and brought traditional blues to audiences who were more familiar with derivative forms such as rock and soul. The albums also brought Winter his only Grammy wins of his long career. Winter would also raise the profiles of blues artists such as John Lee Hooker and B. B. King. In return, Winter became an icon to blues-influenced guitarists such as Warren Haynes, Eric Clapton and Billy Gibbons. His recordings also helped give rise to the southern rock genre, with groups like The Allman Brothers and CCR covering blues standards in their early records.
Winter’s health had been in decline for quite some time, but that did little to slow down his production. He continued to record and perform right up until his death. In fact, his last performance was on July 14th, just two days before he passed. He still has recordings that are yet to be released. It goes to show that this was man who lived the blues instead of just playing them. The recent revival of interest in vinyl and folk music will hopefully bring his music to an entirely new generation. Or maybe there is an artist out there who will do for Winter what he did for Muddy Waters and other blues legends. Until then, we remember the man who kept the blues alive. RIP Johnny Winter.