The purpose of most television shows is to take the viewers away from the real life and allow them to insert themselves into a life that isn’t theirs. There’s one show that refuses, and instead the viewer gets to see life on the other side of the tracks.

“Shameless” is about the Gallaghers and their struggles with living, money, and having to take care of their alcoholic father. The Gallaghers are, in order of age, Fiona, Phillip “Lip” Gallagher, Ian, Debbie, Carl, and Liam. Fiona, the eldest, plays house mom, working odd jobs and taking care of her younger siblings with the help of Ian and Lip. Frank, their alcoholic father, does nothing but cause trouble for his children, costing them more money than he spends on alcohol at the local bar. This slice of life dramedy follows the Gallaghers as they try to piece together their dysfunctional family. The producers keep the same main cast, which allows the viewers to watch the Gallagher children grow up, along with the actors.

The show is more of a drama than a comedy, but it has its witty moments, the humor sarcastic and ironic. Currently in it’s fourth season, barely a few episodes have passed before the show was renewed for a fifth season. Currently up to 5.5 million viewers, it takes the watcher on a darkly funny journey.

It also follows a trend of British television shows being converted into American shows. The original “Shameless” first aired in 2004 on Channel 4 with the same plot and characters. It ended, but not before running for 11 seasons and winning numerous awards, including a British Academy Television Award for best drama series, and a nomination for Best British Drama at the National Television Awards in 2007. Other shows that have been converted are The Office and Skins.

The UK version isn’t the only one the critics love. The pilot episode had a whopping 982,000 viewers when it aired in 2011, rivaling the witty television comedy, “Dead Like Me,” which became the next most popular show in 2003. The actors are also widely known and popular, including Emmy Rossum and William H. Macy. Emmy Rossum is most well known for her role as Christine in The Phantom of the Opera. She was nominated for Best Actress in a Drama Series. William H. Macy is a well known actor in television shows and movies, and for Shameless he was nominated for a Critics’ Choice Television Award for Best Actor in a Drama series. “Shameless” was nominated for a GLAAD award in 2012 for Outstanding Drama Series. Other actors include Joan Cusack, and Steve Howey, who is best known for his role in Reba as Van.

Currently in its fourth season, “Shameless” airs every Sunday evening on Showtime. There’s no set time, since there are different channels for Showtime. The show is rated NC-17 for depictions of suicide, graphic violence, nudity, graphic sexual scenes, and language. Viewer discretion is advised. 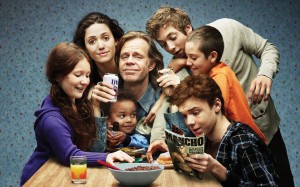