STORMY WATERS // HOW ONE COMMUNITY LEADER PROTECTS OUR MOST IMPORTANT RESOURCE 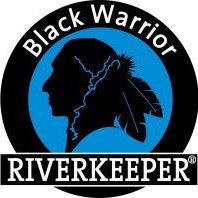 Flash-flooded parking lots and streets create rivers and lakes of flowing water throughout Tuscaloosa. A styrofoam cup, cigarette butts, and a discarded water bottle are the boats floating along this channel. A question seldom asked, Where does the journey end for this fleet of litter?
The Black Warrior River is being used as a dumping site for waste generated throughout the watershed. The pollution creates a ripple that ultimately affects the health and well being of the citizens of Alabama, our natural resources, and future generations. This is where the citizen-based Black Warrior Riverkeeper organization and staff Riverkeeper, Nelson Brooke, come into play. The nonprofit initiative was formed in 2001 to protect and restore the Black Warrior River watershed and give a voice of citizen enforcement to the river.
“The reality is that we have a serious problem on our hands but we don’t know the end result,” Brooke said of the abundant and complex issues plaguing the Black Warrior River.
Brooke is a full-time Riverkeeper for the Black Warrior Riverkeepers, averaging about 50 to 60 hours a week testing water, traveling around the state teaching residents of the dangers and consequences of pollution, addressing companies about their pollution, and taking non-compliant polluters to federal court.
Birmingham native and Coosa Valley Riverkeeper Frank Chitwood remembers his first official site visit with Brooke.
“Nelson has so much expertise with field work, he’s one of the best Riverkeepers out there,” he said.
The Alabama Department of Environmental Management (ADEM) gives permits to corporations, requiring each to do monthly testing for pollutants in its waste and the surrounding areas. The violation of these permits is not only simple, but also a daily occurrence.
“Our state environmental agency gives out permits to municipalities and private entities to treat waste water properly and discharge it back into our streams, rivers, and lakes,” Brooke said. “And we started reviewing permits and permit compliance, and we found that sewage was a pressing issue because a lot of these permits used were discharging untreated sewage right back into our waterways…into our drinking water.”
When asked how these corporations slide past the regulations unnoticed and if ADEM is to blame for this, Nelson said, “If they don’t know [about the violations] then they’re [ADEM] not doing their job, and if they do know, then they’re not doing their job because they’re not enforcing [the law].”
Brooke’s dedication and passion for saving the most aquatically diverse river in America is nothing short of inspiring. When asked about his personal goal for the river, Brooke said, “Work ourselves out of a job. If the state agency is doing its job, then we won’t have to.”
By targeting sewage, a major aspect of pollution, Brooke hopes to educate Alabamians about the importance of proper disposal of all types of waste and to instill a sense of awareness of unnoticed daily occurrences.
“We’re not taught where our sewage goes, where the landfill is, where our trash goes,” he said. “We just go about our daily life and consume and churn out crap and don’t really think about it.”
Data taken a few years ago showed that only 1 to 2 percent of the population of Alabama recycles. An article in The Birmingham News found that “Alabama’s recycling rate is a meager 8.3 percent, which is far below the 25 percent goal set nearly two decades ago.” This shows the blatant disregard, lack of concern, and lack of responsibility that Alabamians feel toward their own natural resources. However, he isn’t focusing on recycling. He’s still trying to educate about the consequences of littering.
“Either way, whether you’re recycling or not, at least make sure it goes somewhere—not on the ground,” he pleads. “You don’t even know the connection from the street to the river, but the reality is that when you drop that cigarette butt into the street, it goes down the storm drain and into the river.”