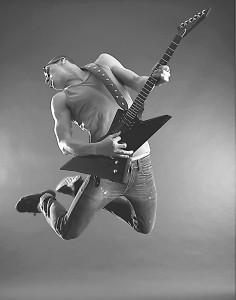 T-TOWN & iTUNES // AFTER THE LIVE PERFORMANCE

Every night in the bars and theaters of Tuscaloosa patrons can hear the sounds that define the musical landscape. Rock, folk, country, electronic and even hip hop permeates the air and electrifies the essence on University Blvd and Temerson Square. While many groups make their living playing tried and true covers for wiling audiences, many others are making their marks with original music that has set the town abuzz with anticipation for new material. Whether it’s at Green Bar, The Jupiter, Rhythm and Brews or several other prime venues, the city is alive with original music being played live.
However, many people believe that once the show is over, you can’t hear this music again until the next gig in town, or Birmingham if you don’t mind the travel. For several groups, this could not be any further from the truth. Popular local groups have been recording material available for fans to take home with them, and keeping with the current times many of these recordings are available online. Many groups make their music available through streaming sites like Soundcloud. Others have put their music up for sale on the popular iTunes store.
iTunes is by far the biggest vendor for online music. A product of the downloading boom of the last decade, iTunes has cornered the market and has been embraced by artists who once resisted the market shift from compact disks to digital downloads. While iTunes is dominated by major label artists, the site has plenty to offer for independent artists, and the bands of Tuscaloosa have taken notice.
The Tuscaloosa connection to iTunes goes back deep into the last decade. Dead Man in Reno, a now defunct metal band, made their way into the online music store. Their self-titled album is still available for download on the site. Another local legend The Dexateens are well represented on Apple’s music center. As of now their self-titled album, Red Dust Rising, Singlewide and Hardwire Healing are available for download. Local guitar hero Ham Bagby sang “I Want to be in the Dexateens”, and you can get that song as well as the rest of his album Sh!T’s Crucial Is Track 7 on iTunes.
CBDB has been blowing up on the regional scene, playing gigs from Atlanta to Nashville. The “joyfunk” favorites gave the city of Tuscaloosa more representation on iTunes here recently. Fans can find their debut album phone.keys.wallet on the music site for download. Organic Androids have a unique mix of rock and hip hop that sets them apart from any other group in Tuscaloosa. Their self-titled EP is available on iTunes, though be careful when searching as there are other albums with that name. Callooh! Callay! have also made a serious notch in the music scene of Tuscaloosa. On iTunes, listeners can buy their albums Sassprilluh Champagne and Talk as well as their “Wide Awake” single.
iTunes is not the only place online where Tuscaloosa music fans can find their favorite local artists. The web is full of streaming sites that cater to independent artists. Soundcloud, as mentioned above, is a good place to look for music streaming. Other artists offer downloads, free or not, from their band sites or label sites. However, iTunes is the elephant in the business, and having music available on this site can really expand the profile of an artist and lead to better sales.
However, downloading the album should never replace seeing the band live. The groups mentioned above cut their teeth in the venues of Tuscaloosa, and the fans should continue to show up to the gigs and experience the music firsthand. But, when the band isn’t playing, having the album is the next best thing. Even more important, financially aiding these bands will help keep the scene alive and well, as well as encouraging new artists to present their music to willing audiences. So next time you’re looking for new music to download, keep your favorite local band in mind: their music might be easier to find than you think.