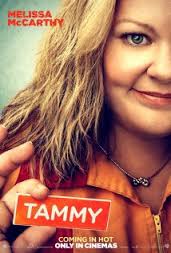 A hoot and a holler for least half of its length, “Tammy” is a woman-run-amuck comedy about a lots-to-love lady whose head is as thick as her figure. “Mike & Molly’s” Melissa McCarthy has a field day with a stellar cast that includes Susan Sarandon, Kathy Bates, Dan Aykroyd, Toni Collette, and Gary Cole in this above average laffer. Despite its uneven tone and narrative quality, McCarthy displays her signature comic genius as only she can. She heaps on the humor in a goofy fast-food restaurant robbery, a roadside encounter with a deer, and a Jet-Ski boating accident where she really makes waves. Occasionally, this larger-than-life clown finds kindred spirits with two minor supporting characters, Ben Falcon and Sarah Baker, who match her irreverent sense of humor. Although it doesn’t qualify as the laugh riot that “Identity Thief” and “The Heat” were, “Tammy” ripples with enough jokes and sight gags to keep you cackling even during its drab moments. The picture builds up a full head of steam, but the insanity loses its momentum about an hour into her antics. McCarthy co-wrote this pleasantry with writer & director Ben Falcone who is also her husband in real life. Unfortunately, they suck the wind out of their madcap protagonist’s sails and make her a mite too ordinary to be interesting after she winds up in the pokey. Additional scenes featuring Falcone and Baker as well as a woefully under-utilized Aykroyd could have brightened this lightweight comedy.
When we first meet our clueless heroine, Tammy (Melissa McCarthy) is having the mother of all bad days. First, our heroine is doing something else when she should have been watching the highway and collides with a deer. Miraculously, the animal survives the crash and sucker punches Tammy in the nose. Tammy’s Toyota isn’t as fortunate. Now, Tammy’s vehicle is so badly smashed up that she has to steer it with her head sticking out the window and her hair blitzing in the breeze. She isn’t a pretty sight when she shows up at work. Tammy works at a Topper Jack’s fast-food restaurant. Not only does she look like an accident herself, but she also is late. Tammy’s prickly, stuck-up supervisor, Keith Morgan (Ben Falcone of “Enough Said”), fires her on the spot. Naturally, Tammy makes a scene going out the door. She is heading home when her smoking Toyota breaks down. If things couldn’t possibly get worse, our bedraggled heroine finds her husband, Gregg (Nat Faxon of “The Descendants”), cheating with a neighbor, Missi (Toni Collette of “Muriel’s Wedding”), over a meal that he has prepared for her. Incensed by Gregg’s treachery, Tammy storms out screaming and marches two doors down the neighborhood to her mom’s house. She begs her mother, Deb (Allison Janney of “Juno”), to let her borrow her car. Deb refuses to loan Tammy either her car or her husband’s vehicle. Deb points out every time her daughter suffers a meltdown, Tammy leaves home, only to turn around and come back.
Tammy finds help from an unexpected quarter. Her foul-mouthed, alcoholic grandmother, Pearl (Susan Sarandon of “Thelma & Louise”), who is afflicted with diabetes, agrees to let Tammy drive her Cadillac as long as she can accompany her. Initially, Tammy wants to rough it alone. When she learns that her grandma carries around thousands of dollars in cold cash, they embark together on a road trip, and interesting things happen. At a nearby lake, a reckless Tammy crashes a Jet Ski into a pier, and Pearl has to ante up several thousands of dollars for the damage. At a Louisville barbecue restaurant, Pearl picks up a man, Earl (Gary Cole of “Office Space”), and they have sex in the back of her Cadillac in the parking lot, while Earl’s adult son Bobby (Mark Duplass of “Parkland”) and Tammy stand around and chat. The local authorities arrest Pearl when they discover she is taking oxycodone rather than her diabetic medicine. Tammy robs a Topper Jack with little more than a bag on her head and another on one hand so she appears to have a gun. She also appropriates pies galore as part of the robbery and has pies distributed to the employees. Before she can use the loot to bail out Pearl, Earl has paid her bail. A police alert about a fat lady in a blue Caddie towing a water bike prompts Pearl to get contact her lesbian cousin, Lenore (Kathy Bates of “Misery”), who helps them destroy the Caddie and the Jet Ski. The authorities aren’t as easily fooled as Tammy and Pearl’s cousin believe, and they disrupt Lenore’s Fourth of July party to arrest Tammy. Afterwards, considerably less colorful things occur.
McCarthy has been acting professionally since 1998. As Sookie St. James, she appeared in 153 episodes of the WB Network’s “The Gilmore Girls.” Nevertheless, she didn’t make an impression until she co-starred in the comedy “Bridesmaids.” Three triumphant comedies later, McCarthy is probably the only plus sized lady in Hollywood since Shelly Winters who could open a big screen release on the Fourth of July. Produced for $20 million, “Tammy” has raked in almost triple its budget. This 97-minute, R-rated, Warner Brothers release has coined over $60 million at the box office. Sadly, despite several funny scenes, “Tammy” isn’t half as humorous as either ‘Identity Thief” or “The Heat.” Comparatively, McCarthy’s “Tammy” character resembles the credit card hacker in “Identity Thief” more than her Boston cop in “The Heat.” Like “Tammy,” McCarthy’s “Identity Thief” character does time for her crimes, but she didn’t emerge as squeaky clean as Tammy. The worst thing Falcone and McCarthy do is rehab Tammy so she is no longer as colorful as she was when she was misbehaving. Worse, they add an obligatory romance between Tammy and Earl’s son that generates little chemistry. Aside from the riotously funny Falcone, Sarah Baker is amusing as the hot tub Topper Jack employee that Tammy eventually visits.