Dressed in a black t-shirt and loose white linen pants, Michael Brannon made his way across the veranda of the Firemen’s Lodge in Northport, shaking hands, patting people on the back and reminding them of how good it was to see them all again.

Inside the lodge, family members and old friends got to know each other all over again over plates of pulled pork and southern-style potato salad. An inexorable disco ball provided the only light, save for what little seeped out from the stage and a nearby kitchen. The people talked and kept themselves busy, but they were waiting on Brannon.

The rows of tables that stretched nearly the length of the room were almost completely full of people waiting to see him perform. To many of them, he is something like a legend. They tell incredible stories about him. One man whispered that, since starting his band The Bluze Crew in 2012, Brannon is rumored to have legally changed his name to his stage name, Michael B Reddy.

And so the people waited for him. But Brannon took his time getting across the room. He casually circled his way around, stopping to mingle at this or that table. He wasn’t ready to get on stage just yet. On the far left of the room, sitting beneath an American flag tacked to the wall above her, his wife Katrina waited for him as well.

Soon the tables were all full, the guests had devoured their barbecue, and everyone was ready to have a good time. So members of The Bluze Crew set up their microphones and plugged in their guitars.

The band is comprised of guitar player Michael “Razor” Sharp, Pianist Don Dendy, self-titled “Ragin Cajun” Fiddle Player Thomas Jenkins and the Harmonica Boy Wonder, Jameson Hubbard, a 19 year old who is regarded by the rest of the band as a harmonica-playing prodigy. When all was set up, Sharp got to singing and the room grew quiet.

The band transitioned back and forth from heart-wrenching ballads to funk-infused, up tempo rhythms that would send the people in the audience to tapping their feet, rocking their heads and tapping their fingers lightly against the table tops to the beat of the drums.

Sharp backed away from the microphone as he tore more violently into the guitar. Hubbard followed his lead and it looked as if his harmonica were leading him to where sharp stood raging against his guitar strings.

The older man, Sharp, would look occasionally up from his guitar to glance at Hubbard. They seemed to be having a conversation through their instruments. Sharp would play a note on his guitar and Hubbard would respond, almost convulsing, blowing into his harmonica with all of his might, making each note come a little bit more alive than the last.

Out in the audience, Brannon’s father, Huey, grinned in amazement.

“He’s just a kid,” he exclaimed. “He can really play! I’ve never heard anyone play a harmonica like that before.”

The Bluze Crew concluded their song and lapsed into something slower, so Michael Brannon took Katrina’s hand and, together, they made their way to a spot at the front of the stage with no tables, joining just a few other couples who had finished their barbecue and wanted to dance.
A little while later, the band took a break and Brannon disappeared. The room returned to its previous state as people crowded in line for second helpings, drifted out to their cars to find their cigarette lighters or stayed at their tables to talk about how much fun they were having.

When everyone returned, Brannon had transformed into Michael B Reddy. He stood before them now at the microphone in the center of the stage, dressed in a hounds tooth coat and one of the cowboy hats no one has ever seen him perform without. He took a moment to offer some personal recollections about his band mates. He pointed first to Hubbard.

“I discovered this guy right here,” he said, harkening back to the time when he first observed Hubbard playing. “Jameson is one of the best harmonica players you’ll ever hear. I’m just telling you.”

At that, Brannon started a soft tune on his guitar.

“You need to hold somebody close, this is a slow one,” he said during the intro to the song. The couples in the audience returned to the dance floor as Brannon began to sing. 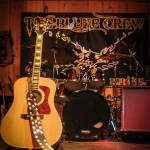 The Bluze Crew performed songs from their latest album, It’s Time for Crewzin. 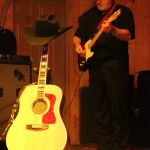 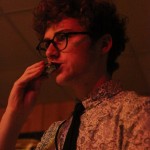 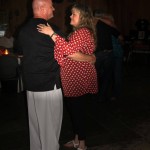 Michael “B Reddy” Brannon dancing with his wife, Katrina. 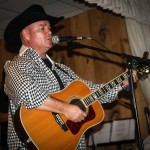 Michael Brannon, better known as Michael B. Reddy, started The Bluze Crew in 2012. 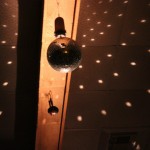