ARTIST BRYCE SPEED EXHIBITS “BETWEEN THE CLOUDS” AT THE C.A.C. 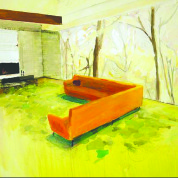 Another art show to look out for is “Between the Clouds” at the Dinah Washington Cultural Arts Center
Feb. 7 – 28, 2014. The exhibit will feature works on paper in watercolor, mixed media and pencil by artist Bryce Speed, a
University of Alabama instructor, in The Arts Council Gallery.
Speed noted loneliness and isolation as a main inspiration for the collection, especially the kind that arises from our
tightly connected world.
“I like to look at it because it’s ironic,” Speed said. “We learn to live with this access to 500 people at once and we
end up feeling separation. You really understand bullying when everyone’s on this level playing field.”
For Speed these feelings are most represented in empty spaces like unoccupied bedrooms and sprawling fields. This
is where isolation meets the idea of invading nature, which Speed addresses in his artist’s statement.
“It’s in quietness that these feelings are heightened,” Speed said. “I create stages, actually. I create this field, the
stage, and people can put themselves into it. It’s a contemplative space.”
Even though Speed is weary of these creeping feelings of loneliness, he said he does not resent the rapid
development of the digital age.
“I’m not resistant to any technology, really,” Speed said. “Especially in the art community we really always have
embraced it.”
Speed’s art career started in his birthplace, Mississippi, but his work was housed in Alabama just two years after he
graduated from the University of Mississippi with a BFA in Painting and Drawing. In 2001 he was featured as part of
Huntsville Museum of Art’s annual Red Clay Survey which highlights contemporary Southern artists. Four years later
he graduated with an MFA in Painting from The University of Alabama, where he currently teaches.
“There was a professor, Brian Bishop, who I really wanted to study with,” Speed said. “That’s what brought me to the
MFA program. He had a way of bringing things back to us and he showed us where to look for opportunities.”
He has taught at the University of Nebraska at Omaha and Central Community College in Columbus, NE and is
currently an instructor at The University of Alabama.
His paintings have been included in numerous exhibitions in several states over the past few years. In 2006 and
2011 his work was selected for publication in New American Paintings, Southeastern and Western editions. In 2009,
he exhibited new work in a show titled “The Great Wave” at PS 122 Gallery in New York, NY. He exhibited at the
Nebraska Governor’s Mansion and the University of Nebraska at Kearney in 2011.
His work will be included in a three-artist exhibition at HEREart titled “Suburbia” in New York, NY in 2014.
Speed’s
work is represented by Modern Arts Midwest in Omaha, NE.
“Between the Clouds” will open with a reception on
Feb. 7 at 5 p.m.
during Downtown Tuscaloosa’s
First
Friday
event. The Arts Council Gallery hours are
9 a.m. – noon
and
1 p.m. – 4 p.m.
on weekdays and
noon – 8
p.m.
on First Fridays.
“I am interested in the juxtaposition of atmospheric space with modernistic architectural detail. Conceptually, the work
investigates ideas centered around isolation, the politics of architecture and the persistence of loneliness in a socially
connected age. Often within the compositions, outside and inside merge, creating an ambiguity of space where
architectural forms reference both the stability and instability of identity. Forces of nature, like water, fire and wind
invade and sometimes destroy these structures. Destruction paired with the temporary (or resilient) nature of

architecture serves as a metaphor for the evolving self.