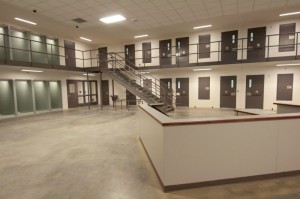 Lynn Gregory was a little disappointed that she didn’t get to spend any one-on-one time with the residents of Aliceville Federal Correctional Institute.

Gregory, 59, has lived in Greene County for 30 years and has spent ten of those years with Tuscaloosa First Methodist Church. Nevertheless, it wasn’t until November 2013 that she and 36 fellow female parishioners would conduct a Kairos Prison Ministry program at the Aliceville Women’s Prison.

True, it was Gregory’s first time in a women’s prison, yet she wasn’t afraid.

“I had wanted to do this,” Gregory said, her voice firm. “I knew plenty of men who did the men’s Kairos program, and I had thought for a long time about doing the women’s work.”

To prepare for the weekend, Gregory spent four consecutive Saturdays in Kairos meetings at the church. At those meetings, each of which lasted most of the day, members practiced scripted conversations and learned appropriate questions and terms.

According to Teann Yeager, state chair for Kairos of Alabama, Kairos requires that all volunteers be trained at least 32 hours.

Gregory assumed the training was the easy part.

“I’m not sure what I was expecting,” her voice trailed off. She took a moment to mull over her thoughts and, after a few seconds, continued.

“I guess I was expecting women who were real bitter,” she said, confidence returning to her voice. “These women had been moved around a lot, there were even a couple women from different countries. I guess I just expected a lot of distrust. [The Kairos leaders] told us when you’re in prison you depend on yourself, you don’t trust anyone.”

On the first day, when the team arrived in the room to be used as a chapel, it was stark. Like the rest of the prison, its walls were gray bricks. Dismal, uninspiring gray bricks.

The team had planned ahead for this, too. Once the chairs and tables were brought into the room, volunteers took to hanging up pictures and construction paper prayer chains made by children in the church. There were enough prayer chains to be wrapped around the entire room.

Next the room was divided in half, with tables at one end and a makeshift chapel and prayer area at the other.  Each Kairos volunteer was paired with a resident, and they sat three to a table, with volunteers on one side and residents on the other.

Gregory didn’t spend the entire weekend in one-on-sessions, but when she did, she found that the assumption about distrust was mostly true.

She described the young woman she worked with most as shy.

“She didn’t realize how much was involved,” Gregory recalled. “You could tell she was real hesitant to trust. Her demeanor was just kind of ‘umm… maybe I’ll do this, maybe not.'”

Over the course of the day, Gregory came to realize, at least in part, why the girl seemed so sad.

“It sounded like the girl had kids. And I learned that her mother lived nearby, but that she was sick and she couldn’t come to see her,” she said

Though she was unable to work with the woman for the duration of the weekend, Gregory was nevertheless satisfied to observe her progress.

“At the end of the weekend you could tell she was trusting the other girls that were in the prison,” Gregory said. “I saw her showing them how to train other girls so that they could be a support to each other.”

Gregory found that one of the greatest differences made in the Aliceville facility is the way that the warden, Waston Adduci, interacted with the residents.

Kairos is characterized by their tradition of bringing cookies to their charges. At the Aliceville prison, though, visitors are not allowed to bring in food. The warden took this fact into consideration. There was nothing she could to allow Kairos to bring in the cookies, that was just the rule.

So, she did the next best thing.

“On Sunday, the warden had the kitchen staff bake cookies, and then turn around and make more cookies with milk for the girls,” Gregory said.

The Kairos team developed several activities specifically designed to establish kinship between themselves and the residents.

Gregory found letter-writing to be the most effective method. Of course, the Kairos members aren’t allowed to bring in sealed envelopes. They’re not even allowed to correspond with the residents or visit them on their own. That’s where the warden stepped in again.

The volunteers wrote the letters before the trip and, when they arrived at the prison, they were provided with envelopes they could use to seal them there.

“I could just tell the difference in [the second resident I spoke with] that Saturday afternoon and Sunday evening,” Gregory said. “That’s about the time they got the letters.”

The team wrote 36 letters and, though their content had to be somewhat generic, Gregory made a conscious effort to extend compassion in the letters she wrote.

“It wasn’t a real long letter, but I would mainly just say that I was glad they chose to participate and that I hoped they’d gained something from the experience, that they had made friends,” Gregory said. “I’d try to encourage them to keep a strong faith and to share with others so they could spread the word about Kairos.”

That’s the idea– to have a ripple effect. It’s the reason Kairos seeks residents with at least two years left in their sentences so that they’ll have time to build their own support groups in the prison.

“I’m under the impression that a good bit of the girls were there because they got caught carrying drugs from people. Maybe the guy got caught and he got less time for telling on the girl, and the girls got longer sentences.”

Gregory said none of the women’s’ crimes were discussed unless volunteered by the women themselves.

“Toward the end of the weekend, there was also a forgiveness service where the residents kind of focused on the people they needed to forgive,” Gregory said. “For example, maybe some needed to forgive the men they were in there for. And to forgive themselves. I think that is an extremely moving service for many of the women, it seemed to be the point where most of them opened up.”

Gregory’s initial fears that she’d not be able to reach the residents were assuaged, and she left the experience with good feeling.

“One thing I did learn about the prison there was that a lot of people who had been involved with Kairos, some of them went down before it was even settled that the prison would be built and they prayed at the area,” Gregory said. “Some of them even volunteered and helped do things like paint. One of the comments a lot of the women had was that, when they were transferred to the Aliceville facility, they felt a peace. They felt a sacredness, a holiness”