INDIA.ARIE ASKS BIRMINGHAM TO ‘LISTEN WITH YOUR HEART’ DURING CONCERT

Four-time Grammy award winner India.Arie doesn’t do concerts. She does songversations, a delightful mixture of music and dialogue between the artist and the audience. Fans of the R&B songstress might recognize the clever term from her 2013 album and 2017 EP of the same name.

Arie, currently on her Worthy tour, brought the songversation to Birmingham for a sold-out performance at the Alys Stephens Center with opener Gospel artist Gene Moore. The May 14 show marked her first show in Birmingham in almost five years.

The theme of the night was worthiness, which she described as deserving or regarding respect. Birmingham, an early stop on the tour, got to see a more vulnerable side of India.Arie, who hadn’t released a full-record in half a decade.

Kicking off the show with “Love’s in Need of Love Today”, the headliner encouraged the audience to carefully “listen with your heart”. Additionally, the singer added a visual spectacle in the form of a projection screen that showcased warm images of scenery, children and other beacons of hope.

The tour, which is in support of her new album Worthy, loosely originated from an on-air interview with media maven Oprah Winfrey, who boldly questioned her self-worth. The conversation, which can be viewed on YouTube, gave the singer-songwriter a new perspective.

“Is that really how I look to people? I realized to some I really did look like that. That I wasn’t worthy”, Arie told the Planet Weekly. “And, more than making an album, I just decided that I was going to go on a journey and shifting that narrative for myself and for other people.”

While playing tracks from her own discography, took a moment to pay homage to the late Prince with a soulful cover of “Diamonds and Pearls.”

Throughout the show, India.Arie took attendees back down memory lane with fan-favorites “Video”, “I Am Not My Hair”, and “I Am Light” while plugging tracks from her recent album. In-between songs The Nashville native conversed with the audience, recounting stories from her childhood and leading the crowd in stretch routines.

In one of her conversations, India.Arie recalled a couple she met during the meet and greet that invited her to their wedding. Feeling gracious, the songstress invited the lucky two down the aisle for a special “first dance” while she sang “The Truth.”

Serenading fans with her soulful sound, the songstress used her stage to entertain but also remind the sold-out crowd that everyone was worthy and deserving of love and respect.

For more great reviews of your favorite artist check out this link: https://theplanetweekly.com/category/music/ 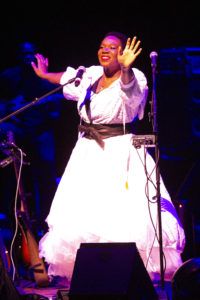 Planet Weekly is reader supported. When you buy through links on our site, we may earn an affiliate commission. We appreciate your continued support.