Daraius Guthridge has never been one to distract himself with dreams of fancy cars and lots of money.

Sure, it would be nice to make it big someday, maybe land a big record deal and make some real money, but that’s not what it’s about for him. Guthridge just wants to be heard.

Originally from Selma, Alabama, Guthridge came to Tuscaloosa to study media production at the University of Alabama. Now 27, he has cultivated a modest local following, although he said he is still new to Tuscaloosa’s hip-hop scene.

He knows that some people do not take him seriously when he tells them that he is a rapper. There is an almost universal cynicism that transfixes the average person when they meet someone who claims to be a musician, particularly someone who claims to be a rapper. In the more than 40 years since hip-hop emerged from the inner city projects of New York, the genre has become increasingly flooded with hopeful young folks who dream of achieving the rags-to-riches success stories of their favorite hip-hop stars.

Perhaps cynicism  is an understandable response for anyone who has been pulled aside by enough young men in gas station parking lots, delivering eager sales pitches for the stack of mix-tapes they had recorded. Who is going to pull out their wallet for a naive amateur with nothing better to do than play pretend, right?

But Guthridge’s music does not sound like something amateur. His work is like a documentary of his experiences. Usually when he hands someone a copy of his newest CD, called “#Unreal” and stamped with his rap moniker D Gut, their response after listening is something like the one Fabian Simpson had. Simpson, 24, met Guthridge when they both took a job driving 348-RIDE vans for the University.

Like most people, Simpson immediately asked for a sample of his work. Simpson, who said he grew up in a family that is musically inclined, thinks of himself as educated on good music. He must have liked what he heard when he listened to the copy of “#Unreal” that Guthridge gave to him after their first conversation because he is now planning to design the artwork for his next CD.

Guthridge said he thinks of what he does as a craft.  To him, hip-hop is an artform, and he is a dedicated connoisseur.

Once upon a time, though, he thought that he wanted to be an engineer. He changed his mind when he was about 13 years old.

Growing up, he spent a lot of time listening to his parents’ old soul and funk records. He had a brother who was eight years older than him and always listening to west coast rappers like Tupac Shakur and Too Short, back in the day before artists like them had been solidified as hip-hop legends. So Guthridge listened along with his brother and he liked what he heard. After that, you could not pay him to take off his headphones. Listening to a new song was like opening the first page of a new book. He soon found himself relating the lyrics he heard to the experiences of his own life. He dreamed of someday being able to pop in a CD and hear his own voice booming from the speakers.

But much of today’s rap does not sound like it did when Guthridge grew up listening to Tupac with his brother. Nowadays it seems mainstream rappers are racing to blend the latest electronic dance music and club trends, digitally bending and stretching hip-hop beats until they become almost unrecognizable. Guthridge has not jumped on the EDM bandwagon, though, and that is perhaps what makes his music so easily recognizable as southern hip-hop. The heavy drum beats and electric guitar melodies that ornament his songs are consistent with the unique blues and rock and roll sounds of the deep south. Guthridge demonstrates a keen ability to match lyrical content with beats that reinforce the emotions conveyed in the stories he tells.

“I make music based on what’s in my head or on my heart,” Guthridge said. “Different music evokes different emotions. I can appreciate a catchy hook. I’m more of a thinking type person so a good story or some meaningful lyrics always catches me.”

Guthridge seldom works with other artists, mostly because it’s so difficult to meet any rappers in Tuscaloosa, let alone one who takes his craft as seriously as Guthridge does. In 2008, though, he met a fellow rapper named Heron Rodriguez. The two met through a mutual friend after Rodriguez heard that Guthridge produced music. After listening to each other’s music they decided to work together on a project and quickly became friends.

“Most people aren’t in it for the love it,” Rodriguez said. “They want to do it because everybody else is doing it and it’s cool. [Guthridge] takes his craft very seriously. He takes life very seriously.”

Originally from Talladega, Alabama, Rodriguez is currently in the process of moving to Los Angeles, California, where he has visited several times since 2012. Each time he returns to Alabama he makes a point to get back in the studio with Guthridge. Even though he said he still has not met another artist he enjoys working with quite as much, the opportunities available to musicians in California are too great to pass up. In Alabama he struggled as a rapper, but within months of being in Los Angeles he was cast as an extra in the film Straight Outta Compton set to be released in August.

For now, Guthridge plans to keep doing what he’s been doing. After recently participating in a small hip-hop festival in Tuscaloosa he has ambitions of further uniting the local hip-hop community. More broadly, he wants to help the genre get the respect he thinks it deserves.

“I think hip-hop is bigger than [jazz and blues] were in their heyday,” Guthridge said. “You can’t really go anywhere without seeing hip-hop influence. I mean, they’re rapping on Comcast commercials. So I don’t think it’s held to as a high of a regard [as jazz and blues] because of the content and subject matter that’s being pushed. You have to show more balance, there’s good sides and bad sides [of hip-hop.] I don’t think the genre will be respected until everybody can know exactly how detailed and how broad it is.” 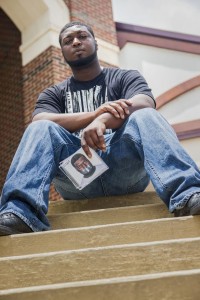