A young man once walked into The Comic Strip on Hargrove Road East, spotted the owner, and asked “do you guys sell comic books?”

Greg Hulsey, 22, raised his hands emphatically over his head as he recounted the story.

“Like, ‘no, none of this is for sale,’” he said mockingly, turning slightly so that the length of his outstretched arms panned along with his eyes across the rows of vintage comic books and collector’s items decorating the walls.

David Odom, 43, was standing nearby and let out a short chuckle. As an avid collector who could tell you just about anything about the history of the Transformers comics, he more accurately represents the store’s clientele.

“I found this place two or three years before he ever bought it,” Odom said, nodding to Hulsey. “This is where I’ve been getting most of my comics ever since.”

As he spoke, he lifted his Chevrolet baseball cap to run a hand through his mussed, shoulder-legnth sandy hair before smoothing the cap back over it again.

These days he spends a good deal of his time standing on the opposite side of the glass-enclosed counter from Hulsey, bantering with him, talking about Transformers, and occasionally trying to recall what year a particular character was introduced in a particular comic before finally giving up and agreeing that maybe Hulsey should just do a Google search on the Mac computer a few steps away.

For the past year and a half, this has been a typical day for Hulsey. Although The Comic Strip is only officially open during the week from Tuesday through Saturday, from 10 a.m. until 7 p.m., it isn’t uncommon for him to come in on a Sunday or stay in the front of the store talking to customers like Odom until 9 p.m.

“My grandfather had a saying,” Hulsey said. “’Do what you love and you’ll never work a day in your life.’”

The funny thing is that Hulsey was never interested in comic books when he was growing up. He was more of an anime kind of guy. One night when he was about five years old, his mother found him in front of the television far past his bedtime.

“She asked me what I was watching and I told her I’m watching this show about a dude that’s a half demon,’” he recalled “She said ‘go to bed. In the morning I’ll buy you all the seasons I can find.’ That’s when my collection started to grow.”

In many ways, his interest in anime anticipated his passion for comic books. One of his favorite anime shows was InuYasha, the story of a half demon, InuYasha, and 15 year old girl from Tokyo who is transported to the Sengoku period after falling in a well. The show was actually based on a Japanese comic book series.

Finally, when he was 18, Hulsey became fixated on a figurine he found of the Joker. He was always a guy who rooted for the villains.

“I literally surrounded myself with everything Joker,” he said. Even now he was dressed in a black T-shirt with a Batman emblem faded enough to suggest that it’s one of his favorites

“I was like ‘you know what? Let’s start doing comics,” Hulsey said. “So I started collecting comic books and [merchandise]. If it had [the Joker’s] face on it then I bought it.”

A few years later, while he was studying business at ITT Tech, he found The Comic Strip. He walked in one day to find that the store’s owner was getting ready to close it down. Hulsey knew that the store, originally located in Northport, had been open since 1992 and was Tuscaloosa’s oldest comic book store. It would sure be a shame if it were gone.

“I pretty much just said to the owner ‘well, how much for all of this stuff?'” Hulsey recalled. “I figured I was going to school to start my own business and this just landed in my lap and I was like ‘I buy comics. I’m into some of the characters. Why not?’ I’ve been doing good ever since.”

He didn’t make very many changes to the store, except that now when a customer walks in they’re usually met with an immediate greeting as well as the sound of The Power Rangers or some other animated comic-based series coming from a flat screen TV mounted on the wall near the register.

His store serves a variety of interests, from comic book lovers to bronies (male My Little Pony fans) to Star Wars fans.

“There are some [customers] who don’t buy comics,” Hulsey said. “I have one customer [who] only buys my Batman toys. I’ve tried to get him to read comics. He said he used to and he flipped a coin to see which one he wanted to continue and it landed on the toys side.”

Aside from talking with customers, wrapping each individual comic book in cellophane and managing the store’s paper work, Hulsey devotes most of his time to tracking down the rare vintage comic books the store specializes in, like an edition of a spider man comic with the first appearance of the character Dr. Octopus.

“I have to go through him like a broker,” Odom said of Hulsey, explaining that he doesn’t use the Internet. Both men laughed at the analogy. “Most of us do special orders for stuff that’s hard to find.”

“It’s the uncommon stuff like the first appearance of Ghost Rider, Marvel Spotlight Five,” Hulsey added. “I have a lot of customers that tell me ‘I can get it on Amazon but I want to support you, the local store. They don’t want big chains here. They’d rather have me be the smiling face behind the counter.”

“He’s the broker of the deal,” Odom added.

Again, Hulsey laughed at the comparison before bragging that one customer had once referred to him as a drug dealer.

“That was when I talked a lady into buying more toys than she needed,” he laughed.

“Hey, comics can be a drug just like any other,” Odom interjected.

Hulsey tilted his head back and squeezed his eyes shut.

Oh, they can be a very addicting drug,”Hulsey said, placing particular emphasis on the word “very.” 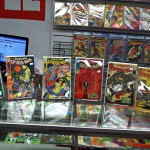 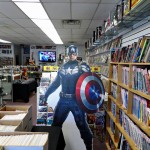