Twin restaurant, which first opened in November 2013 in the former Tuscaloosa Country Club, has now reopened after renovations.

Identical twins Lee and Reeves Bell operate the restaurant, in addition to being the head chefs.

“I’m not aware that anywhere else in the whole world has identical twin chefs, one doing classic dishes, and one doing sushi. I mean, how could that not be awesome?” says Reeves.

Reeves Bell, the sushi chef,  can be distinguished by the industrial piercing through his left ear and a colorful bandanna wrapped around his forehead. The bandannas are a key part of Twin’s image.

“A bandanna helps keep focus while you’re working with razor sharp blades…my sushi knives can cut God. When I put it on and tighten it around my head, it makes me feel ready to go. It also keeps sweat from falling in your eye. It’s just our thing here.”

His brother, Lee, has a raspier voice and fewer laugh lines around his eyes. He is in command of classic dishes, and management of the restaurant.

Reeves describes his brother as, “the serious one. It’s right on our logo. We both have huge personalities, but we run different kinds of kitchens. When he’s working, my brother’s more serious. In his kitchen, he’s kind of the in-control guy, he wants to get it done. He’s yelling, running around. In mine, I’m always smiling, joking around. That’s what you have to do as a sushi chef. You’re right in front of the customer, so you’re entertaining them and having a fun time, all while you’ve got the razor sharp knives. If you’re not relaxed and calm and happy, it shows in the sushi you make. It won’t come together.”

The brothers began in the restaurant business as a way to pay for college, and it developed into a passion. Lee says, “There’s nothing that more mirrors the human condition in art form than to create something beautiful with all five of your senses. And to enjoy it,  you’ve got to destroy it. Which is just so much fun.”

Reeves jokes that the key to working successfully with his twin is, “to stay drunk most of the time.”

“Really, it’s great working with Lee. At the end of the day, it’s great to have a business partner I can 100 percent fully trust, because he shares my exact DNA. Also, we get into a really bad fight once a year, and I always win,” says Reeves.

Lee adds, “We weren’t always close, we hated each other when we were kids. Then Reeves got into a horrible accident when he was about 21. He died, came back to life, the whole nine yards. After that, we were inseparable. Working with him, it’s awesome. We’re like an old married couple, we work together, we live together.”

When friends purchased the Tuscaloosa Country Club in April 2013, they invited Lee and Reeves to transform it into a restaurant.

“Every chef dreams about having their own restaurant…it was impossible to say no,” says Reeves.

The country club is a stately building by the river, tucked away on 6th street in a historic district. It was built in 1920, and overlooks one of the oldest golf courses in Alabama. Its history is glimpsed in the details; narrow doors, an abundance of chandeliers, and the silver plaques with the names of former members on the lockers in the former locker rooms, which have been converted into restrooms.

Lee says, “The potential here is amazing. It’s got the bones. The location is part of its charm. It’s kind of out of the way, nobody knows about you. They keep wanting me to get a sign. But I think I’m not going to.”

Reeves chimes in, “Yeah, I say we need to put snipers on the roof in case anybody finds this place.”

“It’s an interesting balance here, trying to appease the old members of the club and keep a respectful nod to the tradition of the place, but still moving  forward,” says Lee.

For Reeves and Lee, one of the key parts of moving forward is their innovative, quirky menu. The menu focuses on the eclectic mix of steak, sushi, and classic dishes. On the drinks menu, whiskey is the priority.

The Bell brothers say their menu was born out of a desire to fill a niche.

“One thing that was lacking in this town was a great steakhouse, that’s where it started. To my knowledge, there’s no one in town now who’s only serving USDA prime and nobody cooks on a 1600 degree infrared broiler like we do,” says Lee.

“Whiskey is another thing that’s not really well represented here. Whiskey is a distinctly Southern spirit, especially when you get into bourbons. And we don’t have any place in town that really celebrates whiskey, that offers cocktails that balance the spirit well with other ingredients.”

Reeves says, “The sushi was added later, because, well, I’m a sushi chef. I like to make sushi differently than most places. We use less rice, and then pack it in with those really high quality ingredients…It’s really satisfying when people say, ‘I just got back from a trip to Japan, and I’m eating better sushi here in the town that I live in.’ It’s awesome to see the expression on the customer’s face…there’s ‘O’ faces all night, they come in and love it.”

“That’s where the irreverence of the menu came about. We’ve got this juxtaposition between the quality of the food and the actual menu, which we think is approachable and fun.  Because we’ve got really awesome steak, really awesome sushi, the ingredients are over the top. And some of our cooking methods you don’t see here. We do sous vide, we do molecular gastronomy, we do things that reading the menu, you would never know we do because we don’t advertise it. I can tell somebody that I’ve got a White Marble Farms rib, chopped with a tarragon infused egg white and avocado ginger sauce and no ones going to order it. But call it green eggs and ham, and it will fly out the door,” Lee says.

Reeves chimes in, “People come to a country club and think they should be wearing a sports coat. I think the menus are proof  that we’re cool. Come in sandals.”

The irreverent menus Lee refers to are peppered with movie references, puns, and names their house steak sauce after an ‘Anchorman,’ quote.

Reeves laughs, “I named the Sex Panther steak sauce. The first time I tasted it, it was so complicated and weird the first thing that came to my mind was that ‘Anchorman’ quote, ‘Sex panther cologne, 60 percent of the time, works every time.’ We just get together and brainstorm and come up with names like Steaks On a Plane, Da Bomblette, and The Hangover. I mean, we had to have a Hangover.”

The brothers have ambitious plans for Twin in the future, involving the TCC golf course and other parts of the building.

Lee adds, “One of the biggest things is, well, first we’ve got to open up the rest of the building. We want to finish the renovation projects, have a 10 acre restaurant garden, and the pool… I really want to get that pool open. I’d love to have a public venue for people to get food and cocktail service poolside.

Another project we have in the works is cosmic night golf, to put in 3 holes or a chipping range. We’re also converting The 19th Hole into a bar, trying to get shuffleboard, pool tables, and craft cocktails. In the future, we want to be open until 2 a.m.”

As they make these goals a reality, the twins credit their staff for the restaurant’s swift progress. Reeves says, “It’s not just Lee and I running Twin. We couldn’t accomplish anything without our staff. We found incredible talent in this town. To have a team of professional, fun, trustworthy people… That’s everything.” 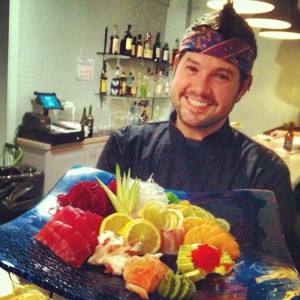