She sings loud, from her gut. Her face twists in a contorted rage and her arms flail wildly toward the audience.

Like the gospel singer in James Baldwin’s classic novel “Go Tell it on the Mountain,” Shawna P convulses with the rhythm, as if her body is unable to contain the spirit that comes into her as she embraces the music. It seems that at any moment her very soul might burst from within her, if only she could push it forth.

She moves across the Bama Theatre stage unpredictably. The gold and silver bracelets decorating her arms shake about without discipline as she shimmies to and fro. The yellow, impossibly intricate patterned caftan she wears bellows freely.

She moves like a woman on a mission. She and her band, The EarthFunk Tribe, want to earth-funk the world.

“It’s earthy, it’s raw and it’s always funky,” she said of her music. “I don’t know man, that’s just my thing. I’m the queen of the EarthFunk Tribe and we do our thang.”

Her dark caftan, the one she wore before taking the stage, fluttered slightly as she burst through the Bama Theatre’s backstage exit. She and her mother, Sheryl Pierce, had taken a limousine from their home near Orange Beach, Alabama, so that Shawna P could preach some EarthFunk at the Tuscaloosa Musik Mafia’s June 28 Southern Rock and Roll Blues Show.

Sheryl Pierce (sometimes called Mama P, depending on who you ask) insisted that it was she who should be taking the stage that night, not Shawna P.  She fancies herself a Pierce family musical matriarch of sorts. She’s the Dionne Warwick to Shawna P’s Whitney Houston; the Judy Garland to her Liza Minnelli.

“Oh yes, I’ve been singing all of my life” Mama P said without even a hint of a smile. She briefly placed a hand on her daughters arm. She continued, even as Shawna P began violently shaking her head in disagreement, adding that “I taught her everything she knows.”

Shawna P indicated the absurdity of her mother’s claim with a wave of her hand.

“Don’t listen to her,” Shawna P said, unable to contain a playful laugh. “This woman will tell you anything.”

Mama P, unable to keep up the ruse, finally let out a giggle. A mother can only dream.

The real story of how Shawna P came to be seems much more complicated and, of course, more colorful.

Years ago, before she’d ever dreamed of competing on season four of NBC’s The Voice or charting higher than any female singer over 45 on the iTunes Top 200 list,  Shawna P made her way onto the southern music scene during the heyday of the same Nashville MusikMafia that produced acts like Big & Rich and Gretchen Wilson. She sang with the likes of Kid Rock, Donnie van Zant, and Robert Randolph and the Family Band.

“I had some really good stuff happen to me,” she said of the experiences. “It just always seemed like it was right there and I was kind of in the background with everything.”

In those days, she still dressed in the boots and cowboy hats popular among her Nashville contemporaries until one day when she ran into one of their professional stylists who lived just one street over from her.

“Wait a minute, what is this? What. is. this?” asked the awed stylist. Shawna P recalls being puzzled. It was just one of the same caftans and head-wraps she always wore when she was kicking it back around the house, away from the music scene.

“No ma’am,” the stylist protested. “You need to wear this on stage. This is you.”

“I don’t know if people are ready for this yet,” Shawna replied. The stylist didn’t give in.

“But people need that,” she insisted. “They need to see you in your element.”

Shawna P mulled over the exchange with the stylist in her head for a few days afterward until, eventually, she started to see things her way. So she packed away all of the boots and cowgirl gear and she never looked back.

“Every since then it’s just been an evolution of sorts,” she said.

The Nashville producers she worked with didn’t know what to do with her after her reinvention. Despite her country music and southern rock and roll roots, Shawna P was just too, well… funky. Her act was drastically different from what people were used to, and marketing her in the same audience as the other performers seemed like a challenge.

Her unique style soon caught the attention of Funk Legend George Clinton. Sensing her potential, he invited Shawna P to perform with him, and he must have been very impressed.

“George Clinton crowned me the long lost queen of funk, which was the coolest thing probably ever,” Shawna P said.

Around that same time, she became engaged to a local rock musician and, after marrying, the two decided to move to the Gulf Coast.

“After I finished my album we decided we were just going to let people come to us [instead of touring], which worked perfectly in the summers,” she said. “It’s great at the beach, you have all these people show up.”

She accepted a publishing deal and made her living writing songs and coaching young singers. She spent the next few years playing at small places around town, but she started to fear that she had lost touch with her creativity.

“It had gotten to where I was just in a rut,” Shawna P said. “I just needed something extra, some kind of validation.”

It sounds like a strange desire for a performer with a following as loyal as the folks who make up Shawna P’s EarthFunk Tribe fan base. She never wanted to be famous, per se, but she felt that she had a message she wanted more people to hear.

She needed to do something drastic. Before she knew it, she was standing in front of Usher, Shakira and Blake Shelton on The Voice, belting out a gritty, soulful rendition of “She Talks to Angels” by The Black Crowes. She never dreamed that Shakira would swivel around in her chair but, when she did, Shawna P knew she could learn a thing or two from Columbia’s highest selling female artist of all time.

“I picked Shakira because I wanted a worldwide fan base,” Shawna P said.

With Shakira as her mentor, she made it into the show’s top 32 and, though she was eventually eliminated after one of the show’s knockout rounds, she was an instant local celebrity. Best of all, she was able to earth-funk other parts of the world, just as she’d hoped.

“I mean, everything’s changed now,” she said. “People treat me differently. I’ve got fans all over the world that are playing my music.”

Soon, she will embark on a European tour, a goal that had never seemed possible before The Voice. In the meantime, she’ll be busy working on a new album. She’s even writing an autobiography, “I, Queen,” to “teach these young girls how to be a queen.”

Mama P glanced at her watch and signaled to her daughter that it was time to go back inside. It was almost time for Shawna P to go on stage.

“You know, it’s never too late to become what you might have been,” she said as Mama P held the backstage door open for her. 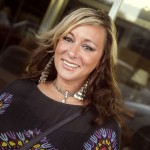 Shawna P credits an aunt who frequently baby-sat her as a child for “teaching me to be a lady.” (But don’t tell Mama P..) 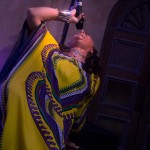 “I’m imprinted by everything i listen to,” Shawna P said. She describes her music as an “amalgamation” of many different styles. 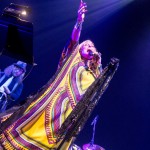 In addition to performing, Shawna P also works as a vocal coach near her home in Orange Beach, Alabama.